The foal’s diet actually determines the quality of the horse in the future. Therefore, it is important to know what the foal’s diet is. What kind of food can you feed a foal? Find out in the rest of this article.

After the foal is born, it will be fed colostrum for 48 hours. Colostrum is the milk produced by the foal’s mother and is very important. It contains a large quantity of antibodies. This milk protects the foal against the microbes present in its environment. This milk also contains several enzymes and hormones that help the foal’s intestinal system to grow. In addition, it is very rich in essential nutrients for a newborn animal.

Feed for foals before weaning 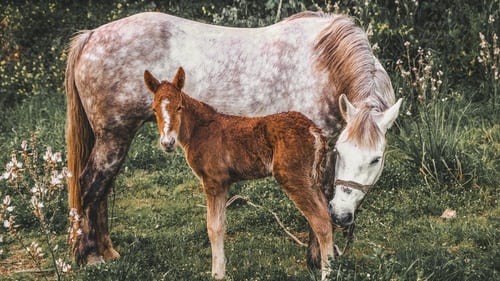 Before weaning, a foal’s diet is essentially maternal milk. In fact, the foal is fed on its mother’s milk for up to six months before any supplementary feed. This is because it is rich in calcium, which helps to lengthen the foal’s bones. Also, the foal’s intestinal system does not allow it to draw nutrients from the supplements. Therefore, the foal’s mother must be well fed so that the foal feeds regularly. From the beginning, there are 60 feedings per day. But after 6 months, one feed per hour.

Moreover, from 4 months onwards, the milk supply becomes insufficient. This is because the foal’s growth needs increase. Whey is therefore the food that supports the mother’s milk. They are very small pellets that contain milk and vegetable proteins.

As the foal is already used to pellets before weaning, his body is prepared for adult horse feed. His digestive system can now be fed plant-based feed. Hay is the main food to be given to the foal. This food helps to consolidate its bones.

We love all pets!